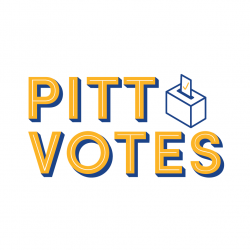 With the presidential elections less than two weeks away, political calls, advertisements, and yard signs are everywhere. Regardless of your political affiliation, one thing is certain: this election is incredibly important. The next president will not only select a cabinet, but also make key decisions on issues surrounding COVID-19, social justice, and much more. Voting is one way to be politically engaged and make your voice heard. Groups like Student Government Board Community and Governmental Relations (CGR) Committee and Pitt Votes have taken action to help educate students, staff, and faculty on the importance of civic engagement.

“It’s important to vote and make your voice heard because politics is so polarized now,” said Ryan Murphy. Ryan is a sophomore chair of the student-run CGR committee, which focuses on maintaining the University’s relations with all levels of government. “Regardless of where you stand, people are going to have drastic opinions. Vote because your opinion matters, too,” emphasized Ryan. The political efforts that Ryan and his peers have conducted since the end of this past summer help demonstrate why Pennsylvania ranks second in terms of student voting power.

“Candidates are always talking about Pennsylvania in debates and throughout the overall election. It feels cool to be in such a powerful state so it’s important that we, as Pennsylvania students, get involved,” said junior Pitt Votes Campus Election Engagement Project (CEEP) fellow, Julia Koehl. Pennsylvania is a swing state that largely influences election results. Our state’s voter turnout has the power to determine who becomes the next president. Through Pitt Votes, a group charged with encouraging institutional non-partisan involvement in student civic engagement, Julia gives educational class presentations, hosts trivia events, and helps manage the @PittVotes Instagram. Students on the CGR Committee and those involved in Pitt Votes have worked hard to showcase Pennsylvania’s election power.

Pennsylvanians are not the only voting bloc that can impact the election. “18 to 35-year-olds make up 40% of eligible voters,” said Emily Hayhurst, a Pitt Votes Graduate Student Assistant. “We’re at this peak age where we’re not too young to be disengaged, but we’re also young enough where big political decisions will affect us for the rest of our lives.” As seen in previous elections, the outcome of this election will directly influence policies surrounding education, racially minoritized groups of students, and the LGBTQIA+ community. “If you can’t find a reason to vote for yourself, there’s always a reason to vote for one of your fellow students,” said Emily.

Voting in the November 3 election is just one way to be politically active. “Students should also become involved on campus with political organizations,” said Ryan. “I would not know half of what I know about politics without participating in these groups.” Engaging in educational and insightful political discussions is another meaningful manner to be politically active. “The news can be complicated at times so it’s important to have continuous conversations with friends and family members about what’s going on,” said Julia. While participating in politics is important, constant participation can cause fatigue. “I know politics can be unbelievably overwhelming,” noted Emily. “It’s important to set limits for yourself. Your involvement is going to be much more valuable if you’re not burned out. It’s important to take breaks and think about things that make you happy. Think about all the good things that are still left in the world.” If you are experiencing election anxiety or have questions, attend a Pitt Votes x University Counseling Center (UCC) event or drop-in session.

If you have questions about voting, email pittvotes@pitt.edu or view voting resources.