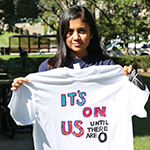 4.6.17 |  Mayor Bill Peduto among featured speakers: The University of Pittsburgh’s inaugural Sexual Assault Awareness Month will culminate with the “It’s On Us” T-shirt Project Unveiling on Thursday, April 13 from 1 – 5 p.m. on the William Pitt Union Lawn. Pitt’s “It’s On Us” campaign—which is part of the national “It’s on Us” initiative launched under former President Obama—is aimed at eradicating sexual assault from college campuses. Among the supporters of the program is City of Pittsburgh Mayor Bill Peduto, who will provide remarks at 3 p.m. Read full release here.