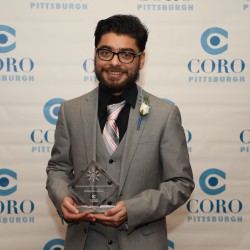 1.31.17 |  On Saturday, January 28, Coro Pittsburgh hosted its annual Martin Luther King Jr. Leadership Awards Ceremony, which recognized individuals who have honored the legacy of Dr. King by demonstrating an inclusive approach to leadership. Pitt junior, Hashaam Jamil, was one of the evening’s big winners, as he was named the recipient of the Distinguished Emerging Leadership Awards.

“For me, the most rewarding part about service is watching other people find their passions,” said Hashaam. “Seeing people grow and find purpose through service is so inspiring for me.”

A native of Woodbridge, New Jersey, Hashaam did not initially have much service experience when he arrived at Pitt; but he quickly developed a passion for it by working with the Office of PittServes as a work-study student.

“By the end of my freshman year, I had become really engaged in community outreach,” said Hashaam. “I sought out leadership roles, and started to love being a leader. From there, I became a resident assistant (RA), and participated in the Emerging Leaders Living Learning Community.”

In addition to pursuing a double major in psychology and sociology, Hashaam’s college career has been marked by a commitment to service and a desire to promote a culture of diversity and inclusion. He currently volunteers through the Student Civic Engagement Council through PittServes, and he was accepted as a Brown Fellow in 2016 to serve the North Side community. In addition, Hashaam has been a leader in the “Bottom Line” program, which engages students from diverse groups to serve and learn with community organizations. He has also volunteered with the Islamic Center of Pittsburgh, and is currently working with the organization to develop an Interfaith Dialogue.

“By the end of my time at Pitt, I hope that any incoming student—no matter what their beliefs are—will feel like they can be accepted here,” said Hashaam. “And I think that getting involved in service is a great way for students to make connections and find that they are welcome in our community.”

Not only does Hashaam hope to encourage more students to become involved in service, but he also wants to be a source of hope for his peers who may be struggling with mental health issues.

“I suffer from depression, and the night I found out I was nominated for the MLK Award, I was feeling really bad—feeling like a failure,” Hashaam said. “Depression is that voice in your head that sounds like you—but is ten times louder.

“It was at that moment, that I decided to check my email, and I saw that I was nominated for this award,” said Hashaam, “and I realized that there were people out there who love me, who were proud of me, and what I’ve accomplished. Being nominated meant that their trust in me had come to fruition in some regard. It made me feel proud, and hopefully, it made them feel validated.”