dbonaventura@athletics.pitt.edu
Connect with Danny on LinkedIn 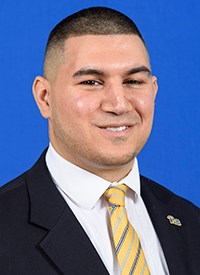 Danny Bonaventura joined the University of Pittsburgh in January 2020 as the Career Consultant for Student-Athletes. Danny assists student-athletes/alumni with career planning and graduate school preparation in addition to coordinating programs within the Cathy and John Pelusi Family Life Skills program.
Prior to joining Pitt, Danny served as the Academic Specialist for the Football Program at Lamar University and the Life Skills Coordinator for the Athletic Department there. During his time he saw oversaw the academics for all 115 football student-athletes, and saw the football program turnaround from a 2-9 record in 2017 to the first FCS Playoff Appearance in school history in 2018 under the leadership of Head Coach Mike Schultz. He also helped the program reach the highest APR number it had ever achieved since the department brought football back in 2010. He assisted with the creation of the Cardinals Excellence Life Skills program for all Lamar University athletic teams, and ran all aspects of it including program development, marketing, and implementation.

He spent 2.5 years in New Orleans, LA where he received his Master of Social Work from Tulane University in December 2016. During his time in New Orleans he worked as a Graduate Assistant in the Academic Services Center for Student-Athletes at Tulane University, and as a Community Based Mentor and Youth Advocate at the Youth Empowerment Project.

Previously, Danny worked in ticket sales with the Spurs Sports and Entertainment as a member of the Inside Sales team, and later as a Sales Representative for the San Antonio Rampage. He enjoyed celebrating the Spurs 2014 NBA Championship victory over the Miami Heat.

A 2013 graduate of Robert Morris University, with a Bachelor of Science in Business Administration with a focus in Sport Management, Danny spent four years as a student-athlete with the football team.

(For students, alumni, parents, faculty and staff)
employer@pitt.edu
(For employers and prospective recruiters)

THANK YOU TO OUR CAREER CENTER PARTNERS