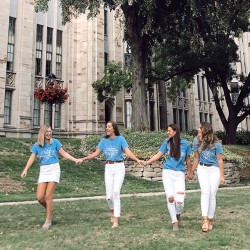 Alicia Rafferty was quiet and shy in high school, never one to step up to a leadership role in any of her clubs, but she says it was the empowerment of being a sister of Sigma Delta Tau that developed her into the leader she is today. “One of the older women in the chapter nominated me for a leadership role,” Alicia explained. “I was so hesitant, but I did it and I felt so supported. When I stood up and gave my speech, I felt like I could do it, and I felt like my sisters were giving me the confidence to do it.”

Alicia is now a consultant for the national organization of Sigma Delta Tau and is working alongside others to bring SDT back to Pitt after the last chapter dissolved four years ago. They have been on campus throughout the fall semester, informing students, and preparing for the special recruitment process that will begin in January to create the new founding chapter.

“Our tagline is ‘empowering women,’” said Hannah Hall, another consultant for SDT who is part of the team that will be running their recruitment process this spring. Since there are no existing chapter members, these consultants provide the structure of the sorority to the founding members and organize some of the initial events, fundraisers, and elections.

Hannah was a founding member of SDT’s chapter at Kent State University, but originally couldn’t see herself in a sorority. “I wanted to go into the military. I was in ROTC, and all of a sudden I did a huge 180 and dropped out of ROTC to go through recruitment,” she explained. “All the national volunteers are such strong women…that’s what really drew me in during my recruitment process, seeing such established, strong women, and I thought, ‘I want to be like them.’”

Along with empowerment, SDT heavily values service, sisterhood, and academics. “It’s Pitt – you all are very academically-driven, which is amazing,” said Hannah as she explained the sorority’s Vice President of Scholarship position. The founding member in this position will be able to think of ideas to support sisters in their academic and professional careers, through study sessions, workshops, résumé building, banquets, and more.

SDT also does philanthropic work for organizations including Prevent Child Abuse America and Jewish Women International. “Our original founders in 1917 were discriminated against based on their religion,” Hannah explained. “Because of all the hatred that they faced, that’s what motivates and fuels our impact now. That’s what drew me into SDT – what it stood for.”

With special recruitment starting soon, Hannah and Alicia encourage any interested women to explore SDT’s Instagram, @SDTatPitt, and fill out the form if you are interested in becoming a founding member. Since they are looking for founders, they will have a separate recruitment process from January 30 – February 2 and host several Cupcakes with Consultants events where you can sit down and get to know SDT’s consultants and other students who share the same values of empowerment, academics, and sisterhood. The first Cupcakes with Consultants will be on Tuesday, January 21 in WPU 548.

If you are interested in joining SDT or any other social sorority, visit the Collegiate Panhellenic Association website for more information and to register for formal recruitment.

To move forward with recruitment, you must attend a Fraternity and Sorority Life 101 session. The first session of the spring semester will be held on January 6 at 9 p.m. in WPU 548.