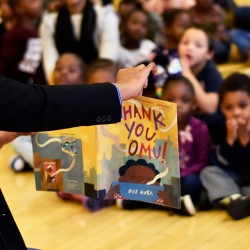 The day began at 8 a.m. in the William Pitt Union where all of the Pitt volunteers prepared to depart to the different reading locations. When talking about RFTR, Amanda remarked, “There are millions of children around the country reading the same book which is really, really cool.” This year Pitt students went to UPMC Children’s Hospital of Pittsburgh, Hosanna House of Wilkinsburg, Crescent Early Childhood Center, and COTRAIC: Hazelwood. Amanda adds, “I think this year was special because we made it a goal to reach 5,000 children on the day of Read for the Record, whereas last year they only reached around 3,000, so it was definitely a big goal to set.”

At Hosanna House and Crescent Early Childhood Center, special guest readers surprised the students. At Hosanna House, guest reader and featured twirler of the Pitt Golden Girls, Mia Krawczel performed a routine for the students. Amanda remarked that see the children’s reaction was a favorite moment. “It was really funny to see the kids because they were so hype while she was twirling, and she was throwing batons in the air and they were screaming… It was cute.” Emily witnessed a similar reaction from the students at Crescent Early Childhood Center, whose special guest, the Pittsburgh Pirates’ Mascot, the Pirate Parrot, accompanied guest reader Pitt’s Homewood Community Engagement Center Director Daren Ellerbee. “Some of the kids sitting near me did not even know who [the Parrot] was, but they still lost their minds when he would do something funny!”

After reading, volunteers facilitated different classroom activities that reflected the book’s theme. “Thank You, Omu!” is about a woman named Omu who cooks stew and shares it with her neighborhood. To emphasize the values of generosity and expressing gratitude, Pitt volunteers had children write what they are grateful for on paper vegetable cutouts and place them in a classroom gratitude jar that they can keep and revisit throughout the rest of the year. They also created “helping hands” that children drew on to show how they help out around home and in the classroom. Children participating in the day also received literacy kits consisting of a copy of “Thank you, Omu!,” a RFTR bag, and several take home activities to complete with their families.

While looking back on her favorite moments of the day, Morgan, who went to the Children’s Hospital, commented, “Just getting to see all the kids so excited to take home their book was really cool at Children’s… It could’ve brightened their appointment because you don’t know what they are there for and if this makes it a little bit more fun… that’s exciting.” Read for the Record raises awareness for the overall mission of Jumpstart, which in part is to use literacy to minimize the kindergarten readiness gap between children from lower income areas and children from higher income areas. Morgan considers this goal whenever she volunteers, but especially felt its impact on Thursday. “This year we set the record [in Pittsburgh] for the most kids reading the same book on the same day. It’s cool because the importance of reading is stressed so much in psychology articles for kids’ learning and development, and you get to take such a big part in making sure a ton of kids get to read a book and have a book in their house… I wish my school or schools near me had it because a lot of kids just don’t have access to it.”

Aside from coordinating RFTR, Emily, Amanda, and Morgan also serve with Jumpstart during regular sessions throughout the week. Emily reflected on how the program has impacted her college experience; “Even when I have been totally stressed with schoolwork and exams, being in the classroom has always put me in a better mood.” Morgan added to the sentiment, “You get so much out of Jumpstart. When the kids make progress or something good happens in the classroom, it really brightens your week. Even if you had a bad exam earlier in the week, it gets you out of this ‘college box’ and makes you realize all these problems and that there are solutions in the real world.”

The Jumpstart Volunteer Coordinators work hard throughout the year to recruit volunteers for the weekly “Readers Programs” that take place every Friday from 9 – 11:30 a.m., in which students conduct a mini Jumpstart session at a local preschool or community center. Additionally, now that RFTR is over, they will start preparing for the next big Jumpstart event called “Jumpstart for a Day” that will take place next semester.

Students who are interested in using literacy to impact children’s lives can apply to work with Jumpstart at application.jstart.org, or by emailing Thomas Bryant for more information.