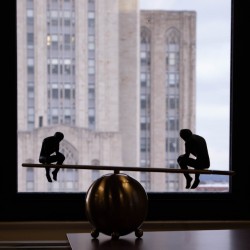 The days get shorter and the air gets colder. Students walk to class and they begin to see evidence of change. Bows, ribbons, wreaths, and other decorations begin to emerge. Building interiors are decorated to fit the evolving world outside. This change is a constant reminder of the popular Christian celebration: Christmas. What is that like for students of varying world views? We had the chance to sit in during a conversation led by Interfaith Dialogue and Engagement program manager Emiola Jay Oriola with students from the Student Advisory Board to share their world views and experiences.

As you walk through the street, above you are strings of lights and decorations stretched between each building. As the sun begins to set, the stores close. It is time to celebrate. It is time to eat and pray. It is Ramadan in Egypt.

Mariam describes a time when her family went to Egypt for Ramadan. This month of fasting, prayer, and reflection is a celebration of community and faith. After sunset each night, the stores close, the mosques open, and everyone is in the streets. They are celebrating, eating, and being thankful. Although Mariam was born and raised in Pittsburgh, her parents are from Egypt and her entire family feels a strong connection to Egypt. Mariam’s family often takes any opportunity to travel to Egypt or Saudi Arabia. As Mariam describes celebrating Ramadan in Egypt, the celebration is starkly different in the United States.

It is the first day back to school after winter break. Mariam is met with questions like, “What did you get for Christmas?” She then explains to her classmates that her family does not celebrate Christmas.

Although there is some disconnect with others, living and celebrating their faith in the United States has given her and her family the opportunity to appreciate and understand the joyous atmosphere of Christmas even though they don’t necessarily celebrate it.

Mariam describes being open with her high school best friend about themselves and their faith. They would invite each other to experience each other’s practices. Mariam attended mass at a Methodist church and her friend came to the mosque for Eid, an Islamic holiday celebrating thankfulness. “We really got to know each other. It made us so much stronger.” As they learned more about the other’s world views, they discovered the driving forces behind their actions. They discovered who the other was as an individual.

“The first thing I did when I went home, my mom said, ‘alright Matthew, time to put up the trees,’ and so we put up the trees. I wasn’t even in the door five minutes.” For Matthew, a Roman Catholic, celebrating Christmas is deeply rooted in his upbringing. Matthew and his family don’t focus on the commercialized aspects that are often attributed to Christmas. In his words, they celebrate by spending time together, being generous and kind, and simply being present where it matters most to them.

As he reflects on his experiences, he recognizes that as he was growing up, most holidays his family celebrated were scheduled days off in their academic calendar. Now that he is at a public college, he says he feels what people of other faiths and world views feel when holidays are not scheduled days off. The opportunity to serve on the Student Advisory Board was one of the first chances he got to expand his understanding and respect of other world views, whatever that may be.

“Even if you come from completely different world views, we’re all vastly different and diverse in our own different ways but we can still come together and have an interesting and fruitful conversation.”

When asked to speak directly to students, Matthew said, “No matter where you’re coming from, find a way to do some little act of good during this time of year. You never know who might be in need.”

“A lot of people think Hanukkah and Christmas go together, but not really.” Although Hanukkah is also known as the Festival of Lights and looks similar to Christmas, the celebration is different. Hanukkah symbolizes the rededication of the second temple. It is celebrated for eight days because a single jar of oil only meant for one day lasted eight full days. Although some Jewish families celebrate Hanukkah with gifts, Hannah’s family emphasizes major Jewish holidays like Rosh Hashanah and Yom Kippur.

Hannah expressed her shock that the major Jewish holidays were overlooked. Rosh Hashanah (Jewish New Year) and Yom Kippur (the Day of Atonement) are celebrated with high regard in the Jewish faith. Usually around mid-September, during the days of Rosh Hashanah, Jewish people ask God for forgiveness, remind themselves not to repeat mistakes, and improve themselves for the coming year. Yom Kippur, the holiest day on the Jewish calendar, falls ten days after Rosh Hashanah. During this day of repentance, followers fast, pray, and reflect to make progress toward self-improvement.

For Hannah, these holidays are time when her and her family can simply be together and be present in something they care about. She expresses how easy it can be to get caught up in a busy schedule. When asked what others can do to expand their understanding of different world views, she said, “Don’t be afraid to say hi to someone new.”

Early in her life, Isabel described her family as “not very religious.” They only attended mass on Christmas and Easter Sunday. Isabel took it upon herself to inspire her family to attend regular Sunday mass. A Presbyterian Christian (PCUSA), Isabel says that the holidays carry a new meaning to her now. Celebrating traditions and spending time with family give her a sense of ownership of her faith.

When asked what she would say to a student about navigating others’ world views, Isabel spoke about a time she invited a Jewish friend to attend mass. Her friend wore a necklace with the Star of David. She frantically asked, “Should I hide it?” Isabel quickly replied, “No, just come as you are. Be present and be yourself.” After studying other religions, faiths, and world views in her classes, Isabel says she is more open-minded and thoroughly enjoys learning about others.

It’s not as straight forward as I thought growing up,” Isabel remarked when describing the differences in Catholic churches and denominations. She often seeks out new experiences when possible. “Knowing that it’s okay if I’m just there and I’m just standing and I’m being respectful and taking it all in and knowing that I don’t have to fake mouth the prayers, but just to stand there and just absorb and be present. My presence there is what matters to me.”

Each of these students express great interest in learning about others, their world view, and what they’re passionate about. One of the pillars of the Office of Interfaith Dialogue and Engagement is: People first. Engage and understand people. Asking questions and exploring others’ world views is not only okay but encouraged. You can get involved and immerse yourself in interfaith experiences by exploring the Interfaith Dialogue and Engagement website or by contacting Emiola at ebo3@pitt.edu.