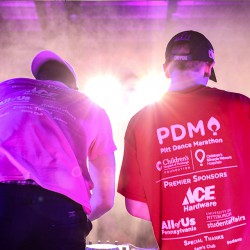 Last year, Pitt Dance Marathon representatives gathered at a Leadership Conference hosted by Children’s Miracle Network, the charity which PDM fundraises for, surrounded by over 100 other leading college dance marathons. PDM was arguably one of the most successful in 2019. They earned two major corporate sponsorships from Ace Hardware and All Of Us in addition to co-hosting their first high school dance marathon. Plus, the participants at PDM 2019 had a great surprise when JuJu Smith-Schuster arrived unannounced at their event. Their greatest success, however, was the unprecedented increase in fundraising.

“Last year, we had a record-breaking year on a lot of different fronts, but the biggest one was that we had a 46% increase in our total fundraising,” said Luke Profy, the Marketing Relations Director of PDM. “We raised over $338,000, which was over $107,000 [more than] the year before.”

The Miracle Maker Award, which is the nationally-recognized award from CMN for the highest fundraising percentage increases in the country, was awarded to PDM at this conference. The award recognized them for their hard work and growth leading up to PDM 2019.

As one of the largest and most well-known student organizations on Pitt’s campus, PDM has a staff of 139 and over 1600 participants. Over the five years that the organization has been fundraising for Children’s Miracle Network and the Children’s Hospital of Pittsburgh, they’ve raised over $1 million to fund treatment for the children and families of CMN and CHP.

Profy experienced the importance of fundraising efforts first-hand. “My sister, who is five years younger than me, was extremely sick when she was little,” he said. “It was something that I remember as a kid – my parents being scared and going to the hospital a lot. This long, drawn-out process.”

“It was something that I kind of didn’t ever think about again until I was nineteen and on Pitt’s campus,” Profy recalled. “People who fundraise and organizations like PDM had a direct relation to helping my family and my sister.”

While this inspired Profy to join PDM, President Jennifer Weber explained that sometimes these transformative moments for members of PDM come later, when they have the opportunity to meet the patients that they are fundraising for.

This was exactly Weber’s experience at the PDM Fashion Show during her freshman year. She was walking with Mia, a 9-year-old patient from the Children’s Hospital of Pittsburgh. Mia told Weber about how she was in the newspaper, and when Weber asked why, Mia responded, “My heart was sick.”

Weber explained how this moment became her long-term motivator as a member of PDM. “That sticks with me. Every day I think about that. I was 18 at the time, and she was 9, and she was worried about the scar on her chest from heart surgery. That just hits you, you know.”

To spark this same motivation in students’ hearts, PDM is launching their 2020 campaign on the William Pitt Union Lawn on October 7, which is being tied together with Child Health Day. This event will focus on educating Pitt students on childhood illnesses and diseases and inspiring them to help PDM fundraise throughout the year and participate in PDM 2020.

“All of us have the luxury and the benefits of a healthy, happy, safe childhood, for the most part,” said Profy. He emphasized that PDM’s campaign launch and Child Health Day will encourage students to “pay that forward and always be thankful and grateful for those experiences growing up.”