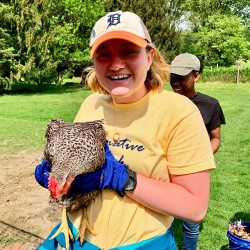 As a high school senior, declaring a major of study can feel like a huge sigh of relief. It can seem like everything else will fall into place. You know exactly where you want to go. Senior Katelyn Bailey was no exception to this illusion. “If you had told me my senior year of high school that I was going to be in Public Service I would’ve said that’s a lie, because I was going to be a doctor.” As a Pre-Med-turned-Public Service major, Katelyn can confirm that the plans you make don’t always play out the way you hoped, but they can lead to some of the most formative moments of the college experience.

Growing up in Michigan, Katelyn remembers her mom finding fun service opportunities for them to do together. Whether it be pulling weeds from gardens, cleaning up rivers, or participating in Girl Scouts, her role in encouraging Katelyn to serve others didn’t stop after grade school. When Katelyn was trying to figure out what to do her first year after her Spring Break plans fell through, her mom discovered the PittServes Alternative Break (Alt Break) program. Following her mom’s advice, she applied to Alt Break and spent her spring break with other Pitt students in building a portion of the Cumberland Trail in Tennessee. Katelyn’s eyes were opened to the world of PittServes.

The following spring, she took her first trip abroad during Alt Break in Chilcabamba, Ecuador. For Katelyn, the highlight of the trip was after a massive storm changed the itinerary on the final day. The main water irrigation canal in the village where they were staying was flooded. Together, the students decided to spend the last morning cleaning out mud and debris from the canal. The immediate fulfillment that she felt after completing that service not only encouraged her to switch to a Public Service major, but also led to her role on Student Civic Engagement Council (SCEC).

Later Katelyn was selected to attend the first Alt Break in Iceland. However, shortly before they were set to depart, the airline the group booked filed for bankruptcy, and they were unable to secure a new flight. Looking back, Katelyn considers this setback a blessing in disguise. She and her group didn’t waste the opportunity to serve. Instead, they organized an environmental justice trip right in their backyard of Southwestern Pennsylvania. Working with Sustainability Program Coordinator, Erika Ninos, to reorganize the program was “one of the greatest experiences I’ve had,” Katelyn recalls. As a self-proclaimed Junior Eco-Warrior, “being able to learn about this area, and serve… and learn about the environmental stuff was definitely something big for me.”

Aside from serving as Operations Co-Chair on SCEC, Katelyn has found other leadership opportunities in ROTC. When reflecting on her experience at Pitt, she remarks, “Everything that I’ve done, even though my major is different from what I do in Pitt Serves and what I do in the army, it’s all tied together. My life’s sort of like a Venn diagram… everything in the middle is cored in service and engagement.”

As she begins her final year at Pitt, Katelyn hopes to inspire new students to find their role in service – whatever that may be. Because her first Alternative Break experience motivated her to be involved in PittServes, she is excited for other students to participate who “might not know much about service but really want to learn about it and be compassionate, because when I was a first year student that’s what got me started.”

Alt Break 2020 students have the opportunity to travel locally, nationally, and internationally. Impact a community this spring break during Alt Break 2020. Applications are open until October 14.

Explore other service opportunities and find your fit through PittServes.