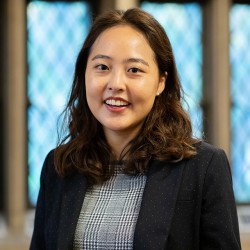 Living in three different countries during critical times in my life was exciting, but also intimidating. I was born and raised in South Korea where differences in appearance and customs were largely uncommon. My parents recognized the homogeneity of South Korea and wanted me to have a more diverse education. We moved to the Philippines when I was in high school and then I moved to the United States to attend college. Each country brought new unfamiliarities and challenges, all of which guide me in the work I do each day.

Because the Philippines is only one of few English-speaking countries in South East Asia, I developed my English ability among native speakers and experienced a new culture daily. Although I thought this immersive experience had prepared me for life in the United States, as an international student at State University of New York (SUNY) Buffalo, I still faced challenges every day. On my first night there, I ate stale bread from a vending machine, and I slept on a bed without any sheets, blankets, or pillows because I did not know where to purchase food and linens. In the days that followed, seeing other students move in with their families was difficult to watch because my family was across the world. Despite practicing my English speaking in the Philippines, it was still difficult making phone calls to places like the bank. If I could not understand the other person or did not know how to respond, I hung up the phone. My parents and I had a close relationship, but I never shared these issues with them because I did not want to worry them. Instead, I became friends with other international students, and we became resourceful together.

Right before I was set to graduate with a business degree, I had a change of heart with what I wanted to do with my life. The thought of working in accounting for the rest of my life did not feel right. From my experience as an ambassador for international admissions I realized that I enjoyed working with people rather than numbers; I enjoyed connecting international and domestic students. However, the thought of pursuing a career in Student Affairs never occurred to me. In Korea there is no major that aligns with this field and I assumed the U.S. was the same. I then found out that my international admissions advisor had a degree in higher education. That intrigued me, but I was still skeptical about pursuing such a degree because I was worried about what my parents would think. I did not see many other international students pursuing this major. After speaking to my advisor about the degree and receiving my parents’ approval, I realized that a degree in higher education was right for me.

Pursuing my master’s degree led me to the University of Pittsburgh, and I am in my third year working as the international programming coordinator and advisor. As part of my position, I oversee the Global Ties Program that is led by fifteen student mentors, assists international students, and provides global opportunities for all students. One of the biggest challenges faced by international students is making domestic friends. Global Ties’ hands-on activities, social immersion trips, and mentoring program, foster interactions that don’t necessarily happen naturally on campus.

One of my favorite duties in my role is helping organize International Week on campus. During this week, which was held this year from October 14-18, students explore new things that they don’t really experience in their normal schedules and cultures. The celebration of International Week is meaningful for the University because the world is really small, and everyone is connected. This gives us the opportunity to appreciate, learn, and respect differences.

I used to think that the challenges I faced as an international student were disadvantages, but now that I am able to help other students with similar issues, I have come to realize that those “barriers” are actually advantages. Every global experience that I encountered helps me better acclimate international students and foster relationships.

Students should know that exploring the world does not need to involve paying massive amounts of money to travel abroad. Global citizenship can start right here at Pitt on the 6th floor of the William Pitt Union.

Visit the Global Ties website for more information about programs, resources, and more.